The Condoms of Japan

As me and Mrs. Sunshine are quite happy with the two little critters we have managed to produce with no immediate wish to further expand the family we use the well proven method of birth control through condoms. As the stock was running a little low I took it upon me to order some more through Amazon.

I buy foreign brand condoms since I know that the size and quality is something I'm comfortable with. After some searching I found a brand I like, 100 condoms in one package (hey, I know I'm overreaching here as two small kids and an active sex-life doesn't really add up, but better to have too many than lacking when we get to it!) and was going to go ahead and buy it when I noticed that the review score was only one star out of five... To make sure to avoid a wrong purchase I checked out the review to see what the problem might be. It was a short, slightly bitter sounding review in Japanese saying something like "I thought this was a great deal but when I tried it I realised that it's not made in Japanese size, I'm really disappointed". That sealed the deal for me as I wanted to avoid "Japanese size".

But there are also many Japanese brand condoms that I felt very tempted to try out and thought I should give you a quick rundown on the brands that I felt were very interesting and what personality types they might be targeting in their marketing. I have earlier done some research into the condom market of Japan (see post here) but thought I should update it a little with this new information.

1. For the guy with a lot of built up aggression - Hokuto-no-ken 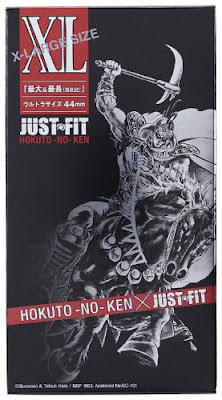 I think the picture speaks for itself. I can just imagine the powerful impact that a pack of these might have during a hot date when the girl asks "wait, do you have a condom?". Pulling out a package of these surely will show that you're a guy that doesn't mess around and take lovemaking very very seriously. 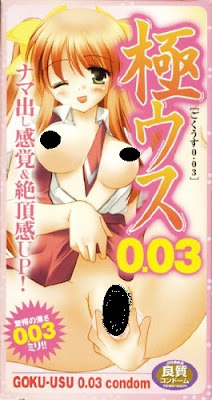 Which girl wouldn't be completely and thoroughly impressed with a guy who pulls out a pack of these? The picture on the package very clearly signals that this is a guy who knows what he wants and how to please the women! The picture is slightly censored by me as the actual picture is so hot and sexy that it's sure to make the blood get pumping in men and female alike.

3. For the Guy who doesn't really want to have sex - Rilakkuma

These condoms take it a bit safer and are probably made for the guys who actually doesn't really want to get laid, but rather sit around and play cards instead. The image confuses me a bit, either it signals a preference to playing cards or the bears and duck sit around playing cards waiting for their friends to finish making love? The expression on the white bear also makes me a bit confused, either she (?) is sad because the guy she fancies is sleeping with someone else or she already got hers but wasn't really comfortable with the experience?

4. For the Guy who is more concerned with manicure - The "Findom" Finger Condoms 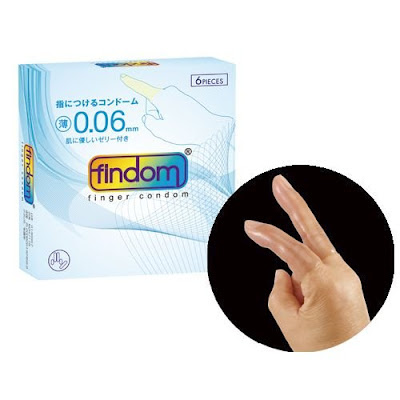 I'm not sure what to say here so I'll just keep my mouth shut...

Email ThisBlogThis!Share to TwitterShare to FacebookShare to Pinterest
Labels: Making Babies in Japan

My wife put a finger-condom over a burn-dressing. I told her in no uncertain terms that I wouldn't let her out wearing it, as people will think something that fits her tiny finger is one of mine!

If you don't mind me posting a link to my blog, I think this story about my hybrid-boy flashing the Japanese fits.
http://hanlonsrzr.blogspot.jp/2011/08/my-hybrid-is-big-in-japan.html

That second pack is clearly designed for posh wanks, and nothing else.

And that white bear's expression is obviously modelled on this, which explains a lot.

Condoms apparently follow t-shirt sizing where an XL in Japan is an "M" in America.

I've busted a couple and stick with American Magnum's. The 1st time you burst an XL condom it feels nice until you realize the box of em' are essentially balloons. I used them as such at a girls birthday party which she barely noticed because I had a large smiling penis stuck to my forehead.

I'm assuming #2 is used so you don't get your inflatable girlfriend all mucky. That's so considerate...

Lol, I have a friend whose girlfriend absolutely loves Rilakkuma, she has Rilakkuma everything: pencilcase, Iphone case, mug, desktop background, if they sell it, she has it. I'm sure she would squeal in delight if my friend pulled out some Rilakkuma condoms. In fact, she'd probably orgasm just upon seeing the packaging. I might find them on amazon and send him the link lol

haha! what an interesting article you got there! I also get confused on the bear thing picture...

Are the Finger condoms connected in pairs (For two fingers) or is it just a demonstration of two separate condoms?

We use to use some brand that was supposively the thinnest and I hate condoms and I didn't mind that one so much ....so....but nothing gives me more piece of mind than the pill and it feels a million times better...clearly if both parties are sexually clean, lol.

#3 made me guffaw. The cookies and milk on the table. It's Saturday night, getting late. The bears are married, the duck is their child. Obviously, as parents, they have no power to make their duck child go to bed early in order to have a little privacy. They're playing cards until the duck finally passes out. Then the wife bear will put the milk in the fridge and they'll go into the bedroom to fulfill their conjugal obligation until next month. And they all lived happily ever after.

The white bear looks like someone who has just been raped or something. Or is it just my imagination...?

Ἀντισθένης - I bet it wasn't the Findom brand of finger condoms at least? You're welcome to post links here at any time and I can relate to that since our little Baby Salaryman got similar reactions (oddly enough since I consider his mandom quite feeble at this point)

Kamo - Posh wanks? You really think so? Wouldn't girls find it so hot with a guy with a pack of those? Actually I thought the exact thing about that poor little bear girl...

Chris - Yeah, I think you're completely right, the sizes are completely off here and I just quit Japanese condoms altogether to not get confused. I should however wear more penises on my forehead!

Kathryn - Or worse, get the inflatable one pregnant...

Rey - If the gf has a low sex drive maybe those condoms can convince her to get it on more often as well?

Steve - Indeed, but I think Kamo is on to something there!

Martin - No, I think you have to use two of them, that way they can sell more packs too!

Persian - The pill is not so common here in Japan and the wife isn't too hot about the hormonal changes that the pills can cause so we just went with condoms, not so bad once you get used to them

Shadow - My guess is that those condoms are not the best seller in Okamoto condoms many brands...

Theresa - I like the scenario, kinda sad in that "it's probably true" way

Mr. K - Yep, you're with me and Kamo here it sounds like!