The image characters we rely on for protection

As I previously, tongue-in-cheek, did the ranking of the top 3 worst image characters in Japan (here) I didn't really think much about it and aimed for a entertaining slant for the post. However, as I the other day noticed the official image character of the Japan fire department, I figured it is time that some serious critical journalism takes a good look at some of these characters that represent official authorities that we depend on in our daily lives. I think it is fair to say that, as a Japanese tax-payer, I should be able to put much higher expectations on such characters than those developed for commercial purposes. If you are a faithful reader you already know that I am unreliable and extremely slow in following up on earlier promises, but it is my intention to follow up other areas and investigate their characters further on as well. 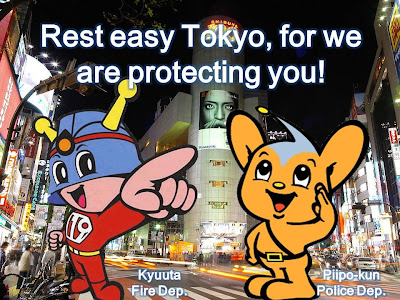 Kyuuta - Protecting you from fires
This is the official character of the Tokyo Fire department and information about who he/she is and what its objectives are is very difficult find which raises the questions "what is it Kyuuta doesn't want us to know?". But yeah, after the whole Keisei Panda backstory mess, it can be a relief to have a character without a ridiculous backstory. In fact, the whole Kyuuta feels a bit amateurish and underdeveloped actually, the name comes from the final "9" ("kyuu" in Japanese) in the Japanese "911 number"; 119, and the red color of his clothes shows that he's a firefighter and the color of the helmet is for water, to extinguish the fires. The antenna can apparently flash when he needs to go extinguish a fire, but he doesn't seem to have any other biological means of making noise than his/hers mouth. I do find it pretty cowardly that they haven't assigned Kyuuta a sex, call it a boy or girl and then live with it. 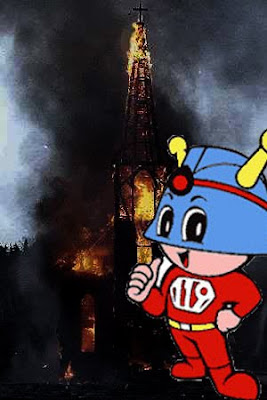 (Also, introducing here for the first time the "character rating scale 1-10, 10 is the best")
Cuteness: 2
Freaky backstory: 1
Educational: 4
Creepiness: 6
Total Verdict: 3 - All in all a pretty lame character and it's pretty obvious that it was primarily made to get kids to remember the 119 number, but that's no excuse to make a half assed attempt. I would advise them to hire Sanrio and have a proper character assigned to the job, it is hard times and we can't afford to keep lame characters afloat just for the sake of it. That he has his own theme song that is extremely lame doesn't really help his case either (listen here).

Piipo-kun - Protecting the streets
Unfortunately the Tokyo PD saw the lead of the fire department and decided that they could not let themselves be seen as sloppy and not dedicated, and they created their own character. The official explanation to the design was "we took some cute characteristics of animals and used them when we created the character". One of the better things with this character is that he, as well, do not have a bizarre backstory. He does have a family however, but they are not much featured and are just serving as props in his adventures. The basic concept of Piipo-kun can be summarized in one word: "surveillance". His ears are large so he can hear what you are talking about, he has an antenna so he can react quickly to any of your sudden movements and his eyes are large so he can see what you are doing. The name is an amalgam of the English words "People" and "Police". 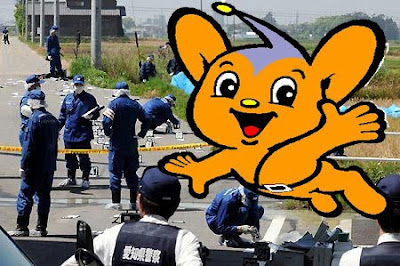 Cuteness: 4
Freaky backstory: 1
Educational: 3
Creepiness: 4
Total Verdict: 4 - I find this character slightly more likeable than Kyuuta, but not by much. The main redeeming feature of this Piipo-kun is that he at least is slightly cute and even if he is surveying my every move, he doesn't seem like he would pose much of a fight if it came to that.
Addition: After some more research, unfortunately I found out that Piipo-kun as well happens to have his own theme song... Not sure which one is worst, but I think this one is slightly better than that of Kyuuta since the katakana Japanese-English at least makes it amusing. Subject yourself to the song at your own risk here (click the link next to the flash icon)
Posted by Mr. Salaryman at Monday, November 02, 2009

I would have set the Creepiness level to 6. He´s naked and wears only those black leather, bondage strips.

I have it on good authority (that of Mrs. Penguin) that Piipo-kun's name derives from the sound the old two-tone sirens used to make.

Of course, if you could disprove this theory, it would help me enormously towards my goal of annoying the heck out of Mrs. Penguin.

Martin - Yes, but "kinky" is not necessarily the same as "creepy" don't you think?

Penguin - What pleasure to be of service, you see I don't just throw around rumours, I work with facts.
This is what the TPD has to say about stuff:
"名前(なまえ)は、人々の「ピープル」と、警察(けいさつ)の「ポリス」の頭文字(かしらもじ)をとり、都民と警視庁(けいしちょう)のかけ橋(はし)になることを願(ねが)って「ピーポくん」と名(な)づけられました" and for good measure shove this link http://www.keishicho.metro.tokyo.jp/sikumi/pipo/pipo2/pipo2.htm in your wife's face and see what she says afterwards

Thanks, Salaryman! As always excellent service. Next time the topic comes up I shall shatter Mrs. Penguin's preconceptions with the aid of your hard facts.